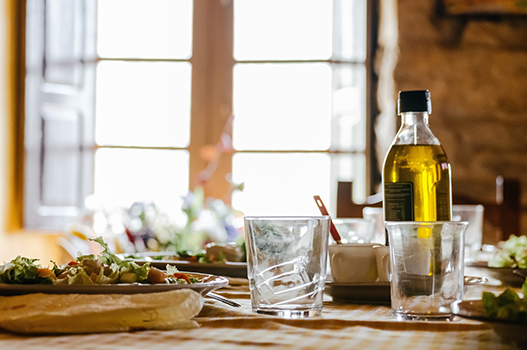 What Kind of Oil is Best for Cooking?

Cooking with oil is as easy as pouring a some into a pan, right? Well, yes and no. Even though you can technically cook with any kind of oil, there are important factors to consider when getting that meal ready.

The Different Kinds of Oil

Whether you’re a long-time olive oil fan or just now learning about it’s holistic (and tasty) benefits, you probably know that there’s a lot of cooking oil options available.

To help make your trip to the supermarket a little easier, we’re going to give you a quick lesson on all the different types so you can buy with confidence.

Extra virgin olive oil (EVOO) is the highest quality and best type of olive oil you can buy. Made using the strictest of standards, EVOO is produced explicitly from the first cold press of olives.

In fact, there are multiple international organizations that monitor and inspect the production methods used at companies producing EVOO. By controlling the temperature at which the olives are pressed and minimizing processing down to basics such as bottling, extra virgin olive oil is able to retain nearly all of its beneficial compounds by the time it reaches shelves.

This is the primary reason EVOO will be the darkest in color and most robust in flavor of the different types of olive oil. While extra virgin olive oil reigns as the healthiest of the olive oils you can buy. Depending on the variety that you buy it there are event different smoke points for cooking. Stop into our store and one of our associates can help you choose the best oil for you cooking needs.

Even if you don’t typically cook at high heats with olive oil, you can still enjoy some of the most popular ways to use it including drizzling over dishes, using it as a dip, making marinades, and for salad dressings thanks to the distinctive, pronounced flavors.

Vegetable oil is easily one of the most common and affordable cooking oils found on the market today. Encompassing any kind of oil that comes from a plant-based source, the health benefits that vegetable oil offers can range widely depending on the source and how it’s used.

Most commonly, vegetable oil is produced from a blend of canola, corn, peanut, soy, safflower, and palm oil, to name a few. Sometimes a bottle will specify if the oil comes from one specific source, but, most times, vegetable oil is blended with any number of other oils to get the final product you see on shelves.

In fact, vegetable oil didn’t start gaining traction in the market until the early 1900’s to answer the rising demand for cheap/affordable fats. For this very reason, vegetable oil is easily the most highly processed oil you’ll find on supermarket shelves.

The end result is a cooking oil that’s high in polyunsaturated fats which are very susceptible to oxidation during the cooking process. So, even though you can find “healthier” vegetable oils, many health professionals have begun to err on the side of caution or even recommend substituting vegetable oil altogether.

In recent years, coconut oil has been caught up in a heated debate that often leaves consumers to either fully embrace it or completely avoid it. Coconut oil is largely composed of saturated fats, which is one of the reasons medical professionals have suggested it’s an unhealthy fat.

While this is generally true with saturated fats, coconut oil is actually comprised of the healthier form of saturated fat that can help to raise HDL (good cholesterol) levels. Of course, many experts don’t recommend using coconut oil as your primary cooking oil since the jury is still out on the long-term effects coconut oil can have on your health

Fat content aside, coconut oil has a higher smoke point than most of the other oils on this list and also packs a flavorful punch that will often transfer to the food you’re cooking.

Often considered as the most popular type of vegetable oil, canola oil is actually made from an artificial plant that was engineered to create an edible version of rapeseed. Since its creation, canola oil has gone through dozens of variations to improve seed quality and streamline the production process.

In addition to being used as cooking oil by consumers, canola crops and oil are commonly used as animal feed and a diesel alternative. On the surface, the fat profile of canola oil – largely consisting of monounsaturated fats – appears to be perfectly healthy.

However, when you learn more about the synthetic chemicals used during the manufacturing process, a different image gets painted. The high heat used to produce canola oil can negatively impact the polyunsaturated fats and even create small amounts of artificial trans fats.

Another drawback to regularly cooking with canola oil is the high fat content of omega-6. Even though omega-6 is perfectly healthy and essential when consumed in moderation with omega-3, too much omega-6 is thought to contribute to a variety of different diseases.

Over the past few decades, grapeseed oil has been thought of as an affordable (and still healthy) alternative to extra virgin olive oil due to its high concentration of polyunsaturated fats. Made from the seeds of grapes, which are typically thrown out during the winemaking process, the oil is usually extracted with chemicals, through some use the much healthier cold press method of production.

Similar to canola oil, grapeseed oil’s high concentration of polyunsaturated fats, which are mainly omega-6 fats are thought to increase the risk of developing chronic diseases. Grapeseed oil’s relatively high smoke point is another reason it’s often advertised as a good oil to cook with.

However, health professionals advise against this selling point due to grapeseed oil’s high concentration of polyunsaturated fats, which are known to react with oxygen at high levels of heat and create harmful free radicals. In light of this information, grapeseed oil is actually one of the worst oils you can cook with, especially when frying.

Though at first, you may not think peanuts contain much oil, peanut oil ranks as one of the most popular cooking oils in the world. Similar to olive oil, there are several varieties of peanut oil that you can find (refined, cold pressed, gourmet, blends, etc.).

Depending on the production method, peanut oils have a range in flavor from very mild to sweet and nutty, making it a popular choice in asian cuisine. With a high smoke point when compared to other oils, peanut oil is widely used to fry foods – which also makes it prone to oxidation.

When heated to high temperatures and for a prolonged period of time, peanut oil can become prone to oxidation which leads to the formation of free radicals and other harmful compounds. In fact, the high concentration of polyunsaturated fats in peanut oil are the most at risk of becoming oxidized.

Even though peanut oil is commonly advertised with a high smoke point, there are other, healthier cooking oil options that have a much higher resistance to oxidation. Another factor to take into consideration with peanut oil is the high concentration of Omega-6 fatty acids, which, in unbalanced doses, can increase the body’s sensitivity to inflammation.

Now that you’ve got the rundown on everything related to cooking with oil, are you ready to put all this knowledge to use? Lucky for you, we have an extensive selection of ultra premium and flavored olive oils that we carry both in-store and online.

Give us a call or swing by in-person to have one of our friendly, knowledgeable staff members get your kitchen stocked with the olive oil you’ve been looking for.