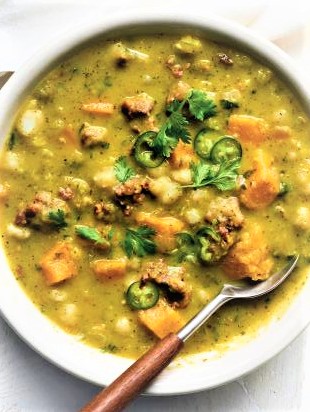 Make the tomatillo salsa – preheat the broiler. Remove the husks from the tomatillos, then rinse under warm water to remove the stickiness. Dry with a paper towel. Put the tomatillos, chiles and sliced onions on aluminum covered baking sheet. Drizzle with the EVOO and sprinkle 2 teaspoons of salt. Broil for a few minutes turning every so often until the tomatillos are soft and slightly charred. Let them cool. Transfer the broiled vegetables to a blender, add the cilantro and puree until smooth. Season with salt and pepper.

Make the chili – heat the Infused Olive Oil in a Dutch oven or a large saucepan over medium heat. Add the chopped onion and cook, stir occasionally, until just translucent (4 min). Add the sausage and cook, stirring and breaking it apart until browned. Spoon out and discard the excess fat, leaving 1-2 tablespoons in the pot. Stir in the oregano and garlic and cook, stirring about 3 more minutes.

Stir in the tomatillo salsa, hominy (including the liquid), cilantro and butter squash. Bring to a boil, reduce the heat to medium low and simmer, covered, until squash is tender (15-20min). Taste and season with salt if necessary. Top with Cilantro and cut chiles.